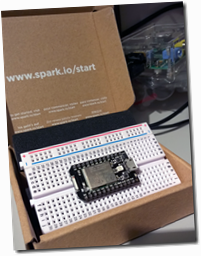 At last nights Charlotte IoT meetup, we had the opportunity to present some ideas that we’d like to build for an opportunity to receive a Spark.IO Core…

I had recently purchased some addressable LEDs without any real destination in mind, it is Christmas-time, so I proposed to build a set of smart lights… I had already intended to build something similar with an Arduino and an ESP8266 Serial WiFi module – but after looking at the Spark.IO site and some examples (and the demo from the first Charlotte IoT meetup) this seemed like a lot easier first step to work on.

Obviously, my Idea got some traction (or at least I got into the pool early enough :] ) so I ended up receiving one of the Core boards to play with and document my progress. 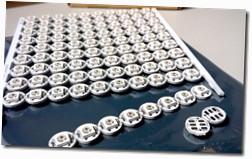 The LED modules are based on WS2812B 5050 LED chips.  I found some on Amazon and with shipping I got 100 modules on mini-pcbs for about 24$ – these are supposed to be the same, functionally, as the NeoPixels from Adafruit. I’m hoping that they are compatible at roughly 1/2 the price… albeit with some assembly required.